Ursa Major or the Big Bear is the third largest of the 88 constellations. Seven stars form a familiar group of stars, or an "asterism" within the constellation. In America they are called the "Big Dipper" or "Drinking Gourd," and in Britain the "Plough" or the "Wain." The Big Dipper is one of the most easily recognizable groups of stars in the sky. It is referred to as circumpolar because it never completely sets below the horizon, but is visible in northern skies year-round.

For ten days in December of 1995 the Hubble Space Telescope collected light from a blank spot of sky, devoid of naked-eye stars, just above the bowl of the Big Dipper. This project, known as the Hubble Deep Field survey, covered an area of the sky about one-twenty-fourth of a degree wide, no larger than a grain of sand held at arm’s length. Within this tiny spot of sky, beyond the reach of earth-bound telescopes, were brought into view over fifteen-hundred galaxies, four billion times fainter than the limits of human vision. This snapshot of the Big Bang’s galactic baby boom discloses galaxies in an astonishing plenitude and variety. There are spirals and ellipticals and bar-shaped galaxies, the same familiar galactic types seen in galaxies nearer to us. Many are colliding, some interacting or exchanging their material. Many are seen edge-on; many face-on; and many from every angle in between. Their stars are colored blue, yellow, and orange. Their light has travelled to us across eons of time from the remotest parts of the known universe.

Ursa Major is included in the ancient star catalogs of Eudoxos of Knidos, Aratos of Soli, and Ptolemy.

Biblical references: "The Bear" is mentioned in Job 9:7-9 and Job 38:31-33. Other constellations alluded to in the Bible are Orion and Taurus.

Only the most imaginative can see a bear in the area of the Big Dipper. There are many star-patterns that look like dippers, triangles, or squares in the sky. There are very few that actually resemble bears or people. Yet constellations were named to honor particular figures in ancient stories, not because the star pattern actually looked like the figure being honored. It took imagination to invent them a long time ago, and it takes imagination to see them now.

The "handles" of the dippers represent the "tails" of the bears on ancient star maps--even though modern bears don’t have long tails! The Big Bear was regarded as a bear before Homer, and an ancient Greek story explains why the Big and Little Bears have such long tails.

A long time ago, Zeus fell in love with a mortal woman named Callisto, who was a far-traveler and a huntress. In jealousy Hera, the wife of Zeus, changed Callisto into a large bear. In a forest one day, Callisto’s son Arcas chanced upon a huge bear. To his horror, the bear immediately started to run straight toward him. Not perceiving that the bear was his mother, Arcas raised his javelin to slay the bear. Zeus saw the tragedy that was about to happen, but not even Zeus could undo the spell of Hera. The only alternative was to change Arcas into a bear like Callisto, only smaller. To keep them safely together, and to make them immortal, Zeus grabbed both bears by their tails, swung them around and around, and hurled them into the sky. So much swinging stretched out their tails. Yet Hera had the last word, moving them to the part of the sky which never sets. There Callisto and Arcas now endure a weariness without rest until the end of the world. (Adapted from Ovid’s Metamorphoses)

Entirely visible from: N of -17° latitude

Partially visible from: between -61° and -17° latitude 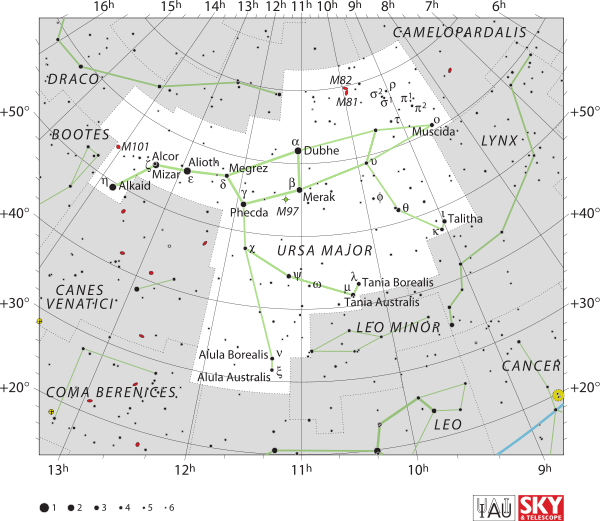