When looking for the Southern Cross, beware of two similar asterisms nearby, both of which point more toward the Large Magellenic Cloud (in the constellation Dorado) than toward the south celestial pole:

The real Crux has two unmistakable marks, which will help you be sure you’ve found the real thing:

Created by Amerigo Vespucci in 1503, along with Triangulum Australe.

Once part of the constellation Centaurus, Crux was separated by early modern explorers. Crux now lies tucked underneath the belly of the Centaur, and is the smallest of the 88 constellations. Located within the Milky Way, its five main stars form a "crosse so fayre and beutiful, that none other hevenly sygne may be compared...", wrote Andrea Corsali in 1517. Because of the splendor of Crux, South America was once called the "Land of the Holy Cross."

Dante wrote, in the opening canto of Purgatorio, of four stars near the southern pole (representing the four civic virtues). Later commentators have interpreted these as referring to Crux (although this is doubtful):

The lovely planet, love’s own quickener,
Now lit to laughter all the eastern sky,
Veiling the Fishes that attended her.
Right-hand I turned, and, setting me to spy
That alien pole, beheld four stars, the same
The first men saw, and since, no living eye;
It seemed the heavens exulted in their flame--
O widowed world beneath the northern pole,
Forever famished of the sight of them!"

Due to precession, Crux was visible from London about 3,000 B.C. Now it is entirely invisible north of Texas, or 35 degrees north latitude. Dante’s reference to "widowed world beneath the northern pole" seems especially apt, since the sight of Crux was once ours, but now is lost. Due to the same precessional motion, coincidentally, the Southern Cross was last seen from the latitude of Jerusalem in the century when Christ was crucified.

Entirely visible from: S of 25° latitude

Partially visible from: between 25° and 35° latitude

Not visible at all from: N of 35° latitude 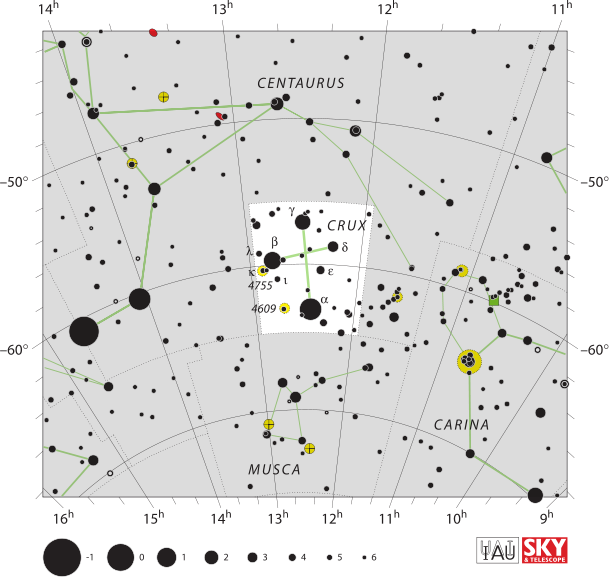