Find the bowl of the big dipper and locate the two stars nearest the handle. A line running through these stars, tracing away from it above the open bowl. This line runs to Deneb, the tail of the constellation Cygnus the Swan. With wings abreast, and long neck outstretched, Cygnus flies along the milky river.

Deneb (DEN-ebb) is a bluish-white supergiant, one of the most luminous stars known (about 60,000 times more luminous than the sun and 25 times more massive). Because it is so far away, Deneb appears to us as only the 20th brightest star in our sky. But if Deneb were as near as Sirius, which is our brightest star, then it would shine as brightly as the Moon. If Deneb were as close as Alpha-Centauri (four light-years away), we could read by its light.

Albireo (al-BEER-ee-oh), the beak of the swan, is one of the most beautiful of all double stars. In close proximity, one of the star-pair shines with a brilliant gold, and the other with a sapphire blue (examine Albireo on the color star chart below).

A small, massive object orbits a giant blue star near the center of Cygnus. Discovered in 1965 and known as Cygnus X-1, it cannot be seen with optical telescopes, but it emits intense, flickering x-rays. Most astronomers believe that Cygnus X-1 is a black hole. Matter from the bluish companion star spirals down toward the black hole, emitting x-rays as it reaches the boundary and disappears inside the black hole forever.

About 3 degrees to the east of Deneb is NGC 7000, called the North American Nebula because of its similar shape. A vast cloud of interstellar gas, it is an easy object for binoculars or a small telescope.

Cygnus is included in the ancient star catalogs of Eudoxos of Knidos, Aratos of Soli, and Ptolemy.

Zeus turned himself into a swan when he visited Leda, queen of Sparta.

Another legend relates that the swan was the hero Orpheus, who enchanted all who heard him with his magic harp.

Another story relates this constellation to the story of Phaethon, a mortal who learned that his father was Helius, the sun god. Helius rashly promised to let Phaethon drive the chariot of the sun across the sky. Phaethon soon lost control, and his reckless driving threatened to destroy earth with the sun’s heat. Zeus intervened by hurling a thunderbolt at Phaethon, who fell into the Eridanus River. In his grief, Phaethon’s devoted friend Cygnus repeatedly dived into the water in search of the body. When Cygnus eventually died from exhaustion, Zeus took pity upon him and changed him into a swan, placing him into the sky.

Below the central star of Cygnus are clumps of stars that form the Cygnus Arm of the Milky Way galaxy. The Sun is located on the inside edge of the Cygnus Arm, about two-thirds of the way out from the galactic center. In a very real sense, then, our lives are closely linked with the stars of Cygnus. As Francis Thompson wrote:

All things by immortal power,
Near or far,
Hiddenly
To each other linked are,
That thou canst not stir a flower
Without the troubling of a star.

Entirely visible from: N of -29° latitude

Partially visible from: between -62° and -29° latitude 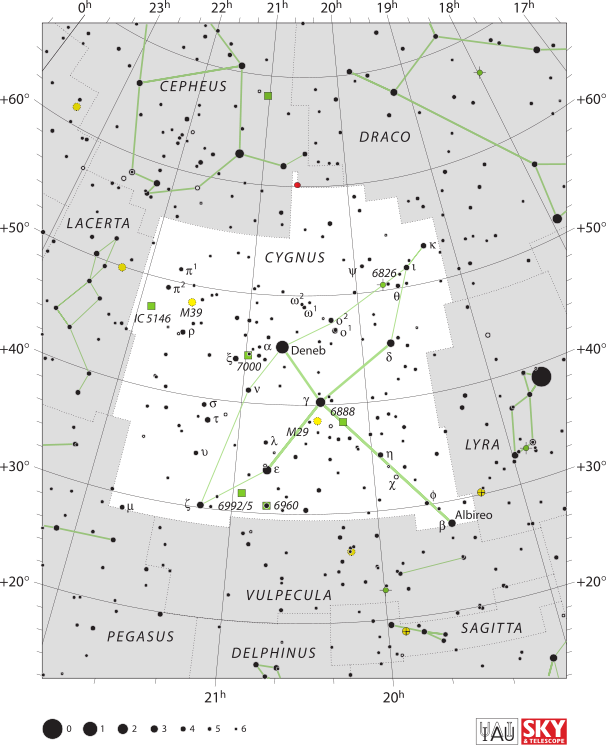