Three stars in a row make up Orion’s belt, within a rectangle of four bright stars representing his shoulders and feet. At sunset in the autumn, Orion’s belt appears to rise straight up on the horizon. The sword hanging from his belt includes M42, the beautiful Orion nebula.

Since Orion’s belt of three bright stars lies upon the celestial equator, Orion is visible from every inhabited part of the globe.

In a comical ballad called "The Star-Splitter," Robert Frost described a man outdoors splitting firewood after the first frost of autumn. Frost’s poetic tale reminds us that Orion’s rising on the eastern horizion at sunset is a marker of autumn.

However, for early risers it is visible all summer. Ancient Greeks marked the Mediterranean harvest seasons with Orion’s positions. The poet Hesiod admonished his nephew farmer to watch for the early summer rising of Orion at sunrise:

Forget not, when Orion first appears,
To make your servants thresh the sacred ears..."

...then the winds war aloud,
And veil the ocean with a sable cloud:
Then round the bank, already haul’d on shore,
Lay stones, to fix her when the tempests roar...

Orion’s right shoulder is Betelgeuse, a red giant that is one of the largest of stars in the sky. If Betelgeuse were our Sun, its surface would reach beyond the orbit of Mars! Betelgeuse was known as Borgil in Middle Earth. (Rachel Folmar)

Bluish Rigel is Orion’s left foot, the 7th brightest star in the sky.

Orion is included in the ancient star catalogs of Eudoxos of Knidos, Aratos of Soli, and Ptolemy.

Orion the hunter boasted that he would slay all animals on earth. To prevent this, Gaia sent Scorpius to kill him first.

In Egyptian mythology, Orion was the abode of Osiris, a pharoah-god who was slain by his jackal-headed brother, Set. Osiris conquered death and, once resurrected, came to reside in Orion. Isis dwelt on Sirius.

Sirius, the brightest star in the sky, rises on the eastern horizon just before the Sun once each year. This following a period of complete invisibility lasting about 70 days (during which time it lies in the daytime sky). Egyptian inscriptions describe the last appearance of Sirius in the night sky as its death; its daytime invisibility as purification in the embalming house of the nether world; and its rising with the Sun as a resurrection. Accordingly they calibrated the process of mummification to this celestial cycle, completing it in exactly 70 days.

The pharoahs, so it was believed, began their journeys in the celestial realms with a visit to Osiris and Isis in the regions of Orion and Sirius. Many peoples have located their greatest gods here. Yet consider Solomon, who said when dedicating David’s temple: "But will God really dwell on earth? The heavens--even the highest heaven--cannot contain you."

Biblical references: Orion is mentioned in Job 9:7-9 and Job 38:31-33, and Amos 5:8. Other constellations alluded to in the Bible are Ursa Major and Taurus.

In Middle Earth, Orion was known as Menelmacar, Menelvagil, or Telumehtar (the Swordsman of the Sky). (Rachel Folmar) The March, 2004 edition of Sky and Telescope suggests that Orion be renamed after Aragorn.

Entirely visible from: between -67° and 79° latitude 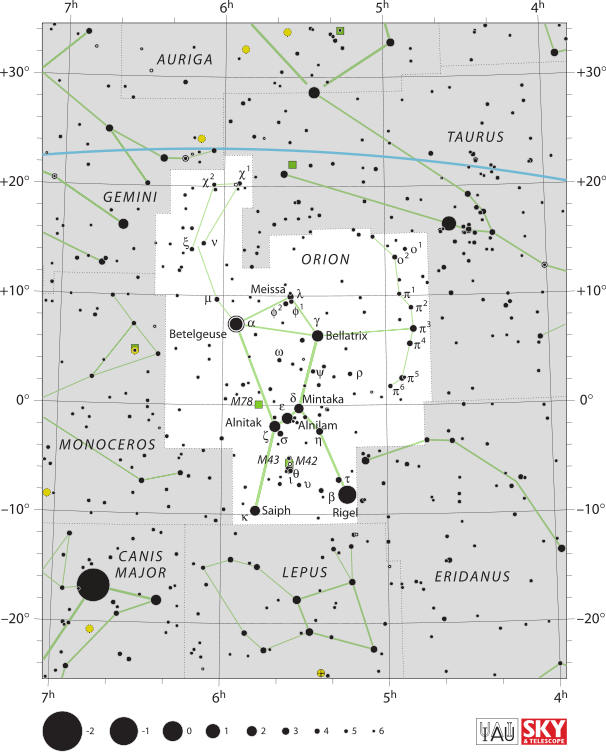 From star patterns to constellation figures. The Orion card from Urania's Mirror.