Andromeda contains one corner of the Great Square of Pegasus (the star Alpheratz). Andromeda’s dress flows outward from the corner along three pairs of stars, with each pair slightly farther apart than the previous pair. Perhaps she is petting Pegasus, who bore the hero Perseus across the ocean on his mighty wings to save her from the sea monster Cetus.

Alpheratz means the navel of the horse, and recalls a time when the star was assigned to the constellation Pegasus. The star that is now Alpha-Andromedae was once Delta-Pegasi. Magnitude: 2.1. Distance: 72 LY.

Andromeda is included in the ancient star catalogs of Eudoxos of Knidos, Aratos of Soli, and Ptolemy.

Andromeda is named for the daughter of King Cepheus and Queen Cassiopeia of Ethiopia. When Cassiopeia boasted that Andromeda’s beauty exceeded that of the sea nymphs, the nymphs prevailed upon Neptune, the god of the sea, to punish Cassiopeia. Neptune sent the sea monster Cetus (sometimes known more favorably as simply a whale) to ravage the kingdom of Cepheus. When Cepheus consulted an oracle for advice, he was informed that only the sacrifice of Andromeda to Cetus the Sea Monster would appease the gods. Thus chained to a rocky cliff, she was rescued by Perseus, who turned Cetus into stone by flashing the face of Medusa before the monster’s eyes. Perseus was carried there just in time by the winged horse Pegasus.

All of these constellations are located in the same region of the sky, as noted in the following poem:

Cassiopeia with her obscure stars,
And next to her roams a bright shape, the sad
Andromeda, shunning her mother’s sight.
The belly of the Horse touches her head,
Proudly he tosses high his glittering mane;
One common star holds their twin shapes joined
And constellations linked dissolubly

Books: Andromeda Strain; Fred Hoyle, A for Andromeda.
Movies: Clash of the Titans; ...

Entirely visible from: N of -37° latitude 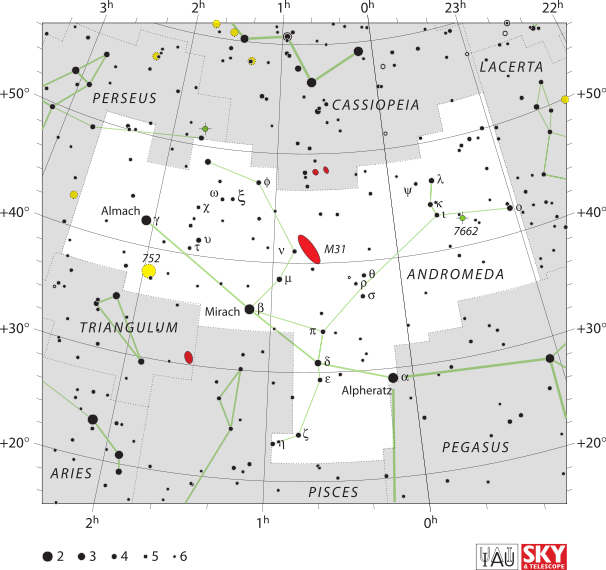