A semicircle of stars between Bootes and Hercules, featuring the bright star Gemma (jewel). To locate the Northern Crown, find Arcturus and Vega, the two brightest stars in the northern hemisphere. Draw a straight line between them and you will find not only the mighty Hercules, but the splendid Corona Borealis.

Gemma is the center jewel in the Northern Crown, the constellation’s brightest star.

Corona Borealis is included in the ancient star catalogs of Eudoxos of Knidos, Aratos of Soli, and Ptolemy.

Ariadne was the daughter of Minos, king of Crete. Each year, fourteen young people from Athens were delivered to Minos as a tribute and fed to the Minotaur, the monster that Minos kept in a labyrinth. When the young Athenian Theseus arrived, Ariadne fell in love with him. She offered to help him escape the Minotaur if he would promise to take her back to Athens as his bride. Theseus agreed. Ariadne kept her part of the bargain, and after Theseus killed the Minotaur, they sailed off. However, Theseus and the Athenians abandoned the sleeping Ariadne during a stop on an island. As she sat forlornly on the rocks, Dionysus (or Bacchus), the god of wine, came upon her and tried to comfort her. Overcome by her beauty, he asked her to marry him. She responded that she was disillusioned with mortal men and wished to be left alone. When he assured her that he was a god, she told him to prove it. Pleasantly he chuckled, and tossed the crown of gold he wore into the skies. There it hung, and one by one seven bright stars danced around it, until the whole band was shinning over head. That is your wedding gift, he said, pulling it down. You are to wear it as an everlasting token of your beauty. When, after a long and happy life together, Ariadne died, Dionysus honored her by putting her crown among the stars.

Entirely visible from: N of -50° latitude

Partially visible from: between -64° and -50° latitude 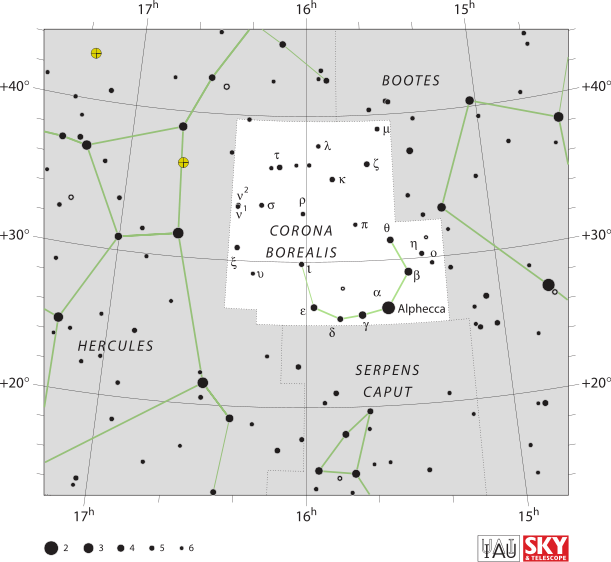