Continue past Arcturus on the curve from the Dipper’s handle ("Arc to Arcturus, then speed on to Spica"). To "Speed on to Spica," go the same distance as it took to reach Arcturus. If it’s not below the horizon, Spica is the brightest star of the constellation Virgo the Maiden. Although Virgo is the second largest constellation in the sky, the rest of its stars are faint. Yet don’t be surprised if you often see a bright visiting planet nearby.

Virgo was long ago recognized for its importance, since it contains the Sun on the day of the Autumn Equinox. Spica lies nearly on the path the Sun follows across the sky, which is called the ecliptic. You won’t see this constellation in the early autumn, for then Virgo lies in the daytime sky.

The Virgo Cluster of galaxies is justly famous as a remarkable part of the sky, well-known to deep-sky observers, about 40,000,000 Light Years away from the Milky Way. The Virgo Cluster of galaxies contains perhaps 3,000 galaxies. To see these beautiful galaxies we must turn a powerful telescope to sweep the sky between the constellations of Virgo the Virgin and Leo the Lion, near the small constellation Coma Berenices (Berenice’s Hair). In a telescope we see them as they were 30-50 million years ago. M87 is one of the brightest galaxies in the Virgo Cluster. Much nearer to us than the Virgo Cluster is one of my deep-sky favorites, the spectacular M104 Sombrero Galaxy, only 25 million light years away.

Virgo is included in the ancient star catalogs of Eudoxos of Knidos, Aratos of Soli, and Ptolemy.

Goddess of agriculture and harvest-time, holding a shock of wheat.

Entirely visible from: between -76° and 68° latitude 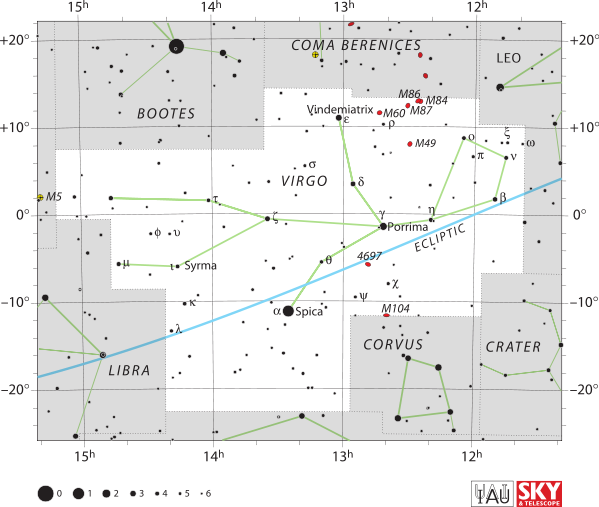