South of Aries and Pisces, one of the largest constellations. Trace to the second-magnitude star Beta-Ceti (Diphda, near the flukes) by following a line southward from Alpheratz (the corner of Pegasus and Andromeda) through gamma-Pegasi, across Pisces and Cetus.

Alpha-Ceti or Menkar is a red giant located in the whale’s head.

Mira lies very close to the brightest star of Pisces (the "knot" holding the two fish together). Hevelius named it Mira, which means marvellous or miraculous, because it was the first star to be recognized as varying in brightness (1596). Mira is visible only for a few weeks each year. Its period is 332 days, during which time it remains usually near the 9th magnitude, too faint to see. Then it brightens to magnitude 1.7, becoming the brightest star in Cetus! Mira shines with a deep reddish tint; as a red giant (like Aldebaran in Taurus) it is massive, and would contain the orbit of Mars. Declination: -3 degrees south.

UV Ceti, which is actually a pair of very dim red dwarf stars (A and B), lies only 8.4 LY away--the fifth closest star system. UV Ceti B is a flare star, and varies from 13th magnitude (not visible to the naked eye) to the 6th magnitude, 250 times brighter (in 1952 this flare-up occurred in only 21 seconds). Why some red dwarfs flare in this way is not known.

Tau-Ceti is the 20th closest star, and the closest solar-type star, which makes it a favorite candidate in the search for extra-terrestrial life. Very few naked-eye stars are dimmer than the Sun, but the luminosity of Tau-Ceti is 0.45 (Sun = 1). Magnitude 3.5. Distance: 11.8 LY.

Cetus is included in the ancient star catalogs of Eudoxos of Knidos, Aratos of Soli, and Ptolemy.

Killed by Perseus as he was attempting to devour Andromeda. Movies: Clash of the Titans; Internet movie database.

Entirely visible from: S of 65° latitude

Partially visible from: N of 65° latitude 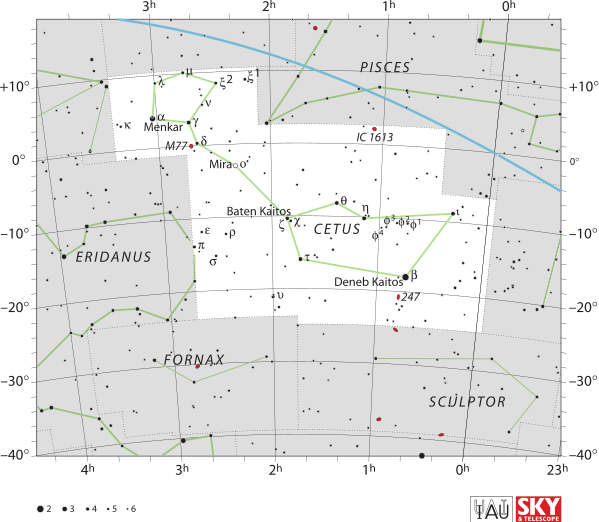