To find Lyra, look for Vega, which forms the brightest point of the Summer Triangle. The summer triangle consists of Deneb in Cygnus the Swan, Altair in Aquila the Eagle, and bluish Vega in Lyra the Harp. Vega soars almost directly overhead in summer, while the bright stars of winter nights are hidden almost directly beneath our feet. Look for a small parallelogram of stars near Vega which forms the frame of the harp.

The bright star Vega is a brilliant bluish-white, almost straight overhead on late summer evenings. Vega is the second brightest star in the northern hemisphere, closely rivaling Arcturus. Vega means Swooping Eagle in Arabic. Vega is 3 times larger than the sun and 27 light years away. Is Vega the only single star to have an automobile named after it?

Lyra is included in the ancient star catalogs of Eudoxos of Knidos, Aratos of Soli, and Ptolemy.

Precession
A slow wobble in the Earth’s daily rotation causes the Earth’s north pole to trace a circle among the stars every 26,000 years. Because of this motion, called precession, the star nearest the pole is not always the same. Architects of the great Egyptian pyramid used Thuban (TOO-bahn), a star in the constellation Draco the Dragon, for their north star.

Polaris, the tip of the Little Dipper’s handle (see Ursa Minor), currently lies within three-quarters of a degree from the polar point, and will reach its closest proximity--under half a degree--in the year 2102 AD. No matter where you are in the northern hemisphere, when you face Polaris you are facing north. Polaris now points northward more accurately than a magnetic compass.

In 14,000 years Vega will become the pole star. This extremely slow but steady cycle of precession was discovered around 150 B.C by the ancient astronomer Hipparchos. Hipparchos combined the qualitative geometrical systems of the Greeks with the quantitative astronomy of the Babylonians, whose ancient observations were etched on cuneiform tablets. This remarkable fusion of cultures, embodied in the achievements of Hipparchos, greatly benefited Ptolemy 300 years later.

Ptolemy advised his readers that to comprehend the great cycles of the stars provides serenity in the midst of continually changing earthly life:

Above all things, astronomy can make men see clearly. From the constancy, order, symmetry and calm which are associated with the divine, astronomy makes its followers lovers of this divine beauty, accustoming them and reforming their natures, as it were, to a similar spiritual state.

This is the lyre given by Apollo to Orpheus according to the Greeks, or to King Arthur according to English legend. Shakespeare tells us that when Orpheus would play his lyre:

everything that heard him play,
even the billows of the sea,
hung their heads, and then lay by.

Orpheus played the harp so well that he charmed Pluto and the guardians of the underworld. They enjoyed his music so much that they agreed to release his wife Eurydice, who had died of a snake bite. Orpheus was told to trust that Eurydice was behind him, and not to look back and check to see if she was there. He could not obey this comand, however, and he lost his wife forever. Later, Zeus places his harp among the stars.

Bode portrayed Lyra as a vulture.

Entirely visible from: N of -42° latitude

Partially visible from: between -65° and -42° latitude 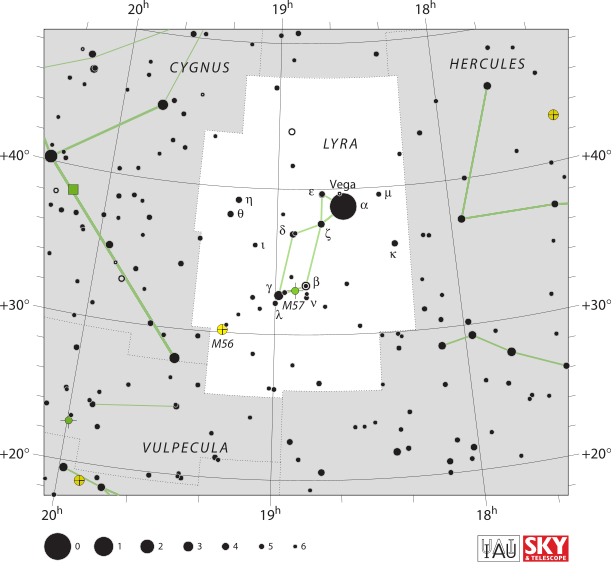